During this final week of Epiphany, we hope that you begin each day with this week’s daily reflection. 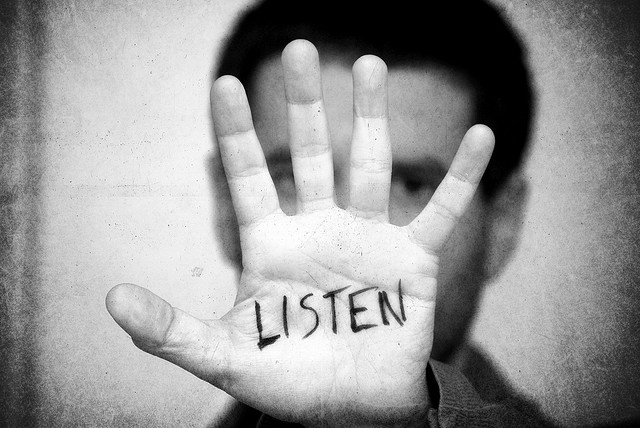 Part of my daily work is sitting with teenagers and talking to them about the nature of life. We work through our issues and struggles via the vehicle of support. My main job is to facilitate the conversation and to draw out a few salient points they might could use to help live better lives.

I love what I get to do each day. To sit and share a journey with a teenager through the rocky paths of adolesence is akin to stepping on holy ground in my estimation. When a teen ( or anyone for that matter) welcomes you into their story for a spell, we get to share something special together.

Yet, the frustrating part of working with a teenager in crisis is to get them to slow down and listen. To be clear, my main function in these groups is not to give advice or tell them what to do but rather to lead them to their own conclusions. However to do so means navigating through a minefield of defense mechanisms, excuses, and justifications.

It seems no sooner than when a good point is made, excuses are thrown around as to why that point is unreasonable. For many, it is too much to just sit and listen. We sabotage ourselves with clever reasoning even though deep down inside we know it to be true.

At the transfiguration, the disciples had very little to argue when they saw the glory of Christ manifested in a literal physical transformation. He became radiant like Moses but even more so. All of the prophecies about Christ began to fall into place as they heard the conversations between Moses, Elijah, and Jesus about his coming departure. Indeed, Christ is who he said he was and it was apparent these disciples had thrown their lot in with the creator of the universe.

For Peter, it was just too much to handle. He had to do something or say something. His immediate fallback was his religious upbringing. Instead of sitting and listening, he fired up the engine of piety and tried to impress. The voice of God, however seemed to send a clear message:

“While he was saying this, a cloud came and overshadowed them; and they were terrified as they entered the cloud. Then from the cloud came a voice that said, ‘This is my Son, my Chosen; listen to him!’”

When I work with teenagers, I want to say something like this. Really, I sometimes just want to say “Shut up and listen”. Because if they would, they might hear something that would sink to the depth of their soul and haunt them until they actually let it change them.

Our defenses are well formed. We want to justify the way we live and the things we say and really don’t want to be changed. It is scary to turn yourself over to the living God and let him change you.

But, what if we shut up and listen to God? What would change? How would life look different.

So today, shut up and listen. Don’t get too wrapped up into doing things or defending your position.

Shut up and listen.

One thought on “Shut up and listen”