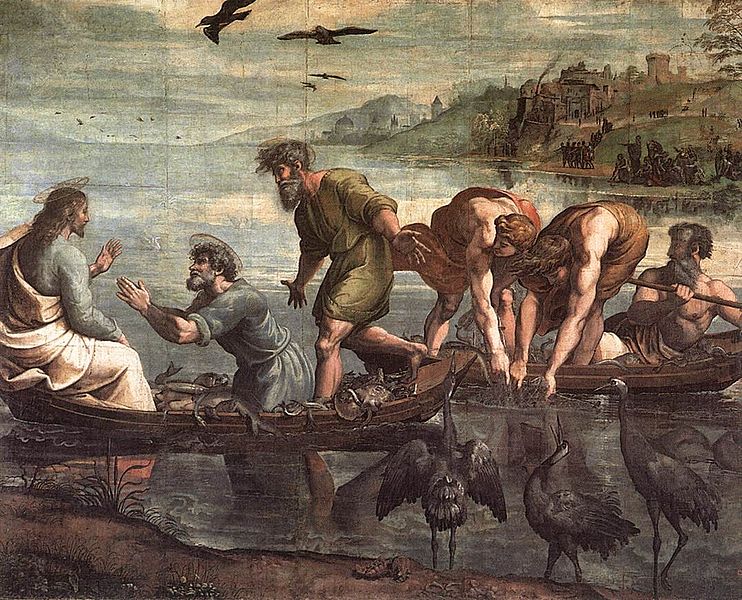 We all need a second chance at something. If you are married, you might need a few more. Any good relationship involves a lot of forgiving and starting over.

As we begin this week in the liturgy, our readings take us to a story unique to the gospel of John. In this epilogue we find the disciples, though having seen Jesus already, back at their original trade of fishing. We can’t be certain about the timing of this event in line with the rest of the post-resurrection narrative, but we can assume the sight of Jesus risen from the grave still surprised the disciples.

I find this story to be one of the more encouraging ones in scripture. This time, Jesus shares a communion unlike any other. The last supper was during the passover feast and is established to remember the death and sacrifice of Jesus. While the last supper calls for remembrance, this meal calls for forgiveness and action. Despite Peter’s betrayal (doing the very thing he said he would do), Jesus shares a meal with him and gives him his new job. He was no longer a fisherman. He was a fisher of men. Peter’s life was to take care of and feed Jesus’ followers.

He wasn’t the sum of his sins. Peter has a new calling that was sparked by the grace and forgiveness of his Lord.

This week, let us focus on spiritual resurrection despite our past doubts and failures. Jesus is calling us to something higher and more perfect. Join us this week as we reflect on the liturgy.

John 21:1-19
1 After these things Jesus showed himself again to the disciples by the Sea of Tiberias; and he showed himself in this way. 2 Gathered there together were Simon Peter, Thomas called the Twin, Nathanael of Cana in Galilee, the sons of Zebedee, and two others of his disciples. 3 Simon Peter said to them, “I am going fishing.” They said to him, “We will go with you.” They went out and got into the boat, but that night they caught nothing. 4 Just after daybreak, Jesus stood on the beach; but the disciples did not know that it was Jesus. 5 Jesus said to them, “Children, you have no fish, have you?” They answered him, “No.” 6 He said to them, “Cast the net to the right side of the boat, and you will find some.” So they cast it, and now they were not able to haul it in because there were so many fish. 7 That disciple whom Jesus loved said to Peter, “It is the Lord!” When Simon Peter heard that it was the Lord, he put on some clothes, for he was naked, and jumped into the sea. 8 But the other disciples came in the boat, dragging the net full of fish, for they were not far from the land, only about a hundred yards off. 9 When they had gone ashore, they saw a charcoal fire there, with fish on it, and bread. 10 Jesus said to them, “Bring some of the fish that you have just caught.” 11 So Simon Peter went aboard and hauled the net ashore, full of large fish, a hundred fifty-three of them; and though there were so many, the net was not torn. 12 Jesus said to them, “Come and have breakfast.” Now none of the disciples dared to ask him, “Who are you?” because they knew it was the Lord. 13 Jesus came and took the bread and gave it to them, and did the same with the fish. 14 This was now the third time that Jesus appeared to the disciples after he was raised from the dead. 15 When they had finished breakfast, Jesus said to Simon Peter, “Simon son of John, do you love me more than these?” He said to him, “Yes, Lord; you know that I love you.” Jesus said to him, “Feed my lambs.” 16 A second time he said to him, “Simon son of John, do you love me?” He said to him, “Yes, Lord; you know that I love you.” Jesus said to him, “Tend my sheep.” 17 He said to him the third time, “Simon son of John, do you love me?” Peter felt hurt because he said to him the third time, “Do you love me?” And he said to him, “Lord, you know everything; you know that I love you.” Jesus said to him, “Feed my sheep. 18 Very truly, I tell you, when you were younger, you used to fasten your own belt and to go wherever you wished. But when you grow old, you will stretch out your hands, and someone else will fasten a belt around you and take you where you do not wish to go.” 19 (He said this to indicate the kind of death by which he would glorify God.) After this he said to him, “Follow me.”

Acts 9:1-6 [7-20]
1 Meanwhile Saul, still breathing threats and murder against the disciples of the Lord, went to the high priest 2 and asked him for letters to the synagogues at Damascus, so that if he found any who belonged to the Way, men or women, he might bring them bound to Jerusalem. 3 Now as he was going along and approaching Damascus, suddenly a light from heaven flashed around him. 4 He fell to the ground and heard a voice saying to him, “Saul, Saul, why do you persecute me?” 5 He asked, “Who are you, Lord?” The reply came, “I am Jesus, whom you are persecuting. 6 But get up and enter the city, and you will be told what you are to do.”

[7 The men who were traveling with him stood speechless because they heard the voice but saw no one. 8 Saul got up from the ground, and though his eyes were open, he could see nothing; so they led him by the hand and brought him into Damascus. 9 For three days he was without sight, and neither ate nor drank. 10 Now there was a disciple in Damascus named Ananias. The Lord said to him in a vision, “Ananias.” He answered, “Here I am, Lord.” 11 The Lord said to him, “Get up and go to the street called Straight, and at the house of Judas look for a man of Tarsus named Saul. At this moment he is praying, 12 and he has seen in a vision a man named Ananias come in and lay his hands on him so that he might regain his sight.” 13 But Ananias answered, “Lord, I have heard from many about this man, how much evil he has done to your saints in Jerusalem; 14 and here he has authority from the chief priests to bind all who invoke your name.” 15 But the Lord said to him, “Go, for he is an instrument whom I have chosen to bring my name before Gentiles and kings and before the people of Israel; 16 I myself will show him how much he must suffer for the sake of my name.” 17 So Ananias went and entered the house. He laid his hands on Saul and said, “Brother Saul, the Lord Jesus, who appeared to you on your way here, has sent me so that you may regain your sight and be filled with the Holy Spirit.” 18 And immediately something like scales fell from his eyes, and his sight was restored. Then he got up and was baptized, 19 and after taking some food, he regained his strength. For several days he was with the disciples in Damascus, 20 and immediately he began to proclaim Jesus in the synagogues, saying, “He is the Son of God.”]

Psalm 30
1 I will extol you, O Lord, for you have drawn me up, and did not let my foes rejoice over me. 2 O Lord my God, I cried to you for help, and you have healed me. 3 O Lord, you brought up my soul from Sheol, restored me to life from among those gone down to the Pit. 4 Sing praises to the Lord, O you his faithful ones, and give thanks to his holy name. 5 For his anger is but for a moment; his favor is for a lifetime. Weeping may linger for the night, but joy comes with the morning. 6 As for me, I said in my prosperity, “I shall never be moved.” 7 By your favor, O Lord, you had established me as a strong mountain; you hid your face; I was dismayed. 8 To you, O Lord, I cried, and to the Lord I made supplication: 9 “What profit is there in my death, if I go down to the Pit? Will the dust praise you? Will it tell of your faithfulness? 10 Hear, O Lord, and be gracious to me! O Lord, be my helper!” 11 You have turned my mourning into dancing; you have taken off my sackcloth and clothed me with joy, 12 so that my soul may praise you and not be silent. O Lord my God, I will give thanks to you forever.

Revelation 5:11-14
11 Then I looked, and I heard the voice of many angels surrounding the throne and the living creatures and the elders; they numbered myriads of myriads and thousands of thousands, 12 singing with full voice, “Worthy is the Lamb that was slaughtered to receive power and wealth and wisdom and might and honor and glory and blessing!” 13 Then I heard every creature in heaven and on earth and under the earth and in the sea, and all that is in them, singing, “To the one seated on the throne and to the Lamb be blessing and honor and glory and might forever and ever!” 14 And the four living creatures said, “Amen!” And the elders fell down and worshiped.

4 thoughts on “Third Sunday of Easter: The miraculous catch of fish”