As we wade a little deeper into the waters of Ordinary Days, we continue to look for how God is working in the regular, mundane, and Ordinary moments. As much as we want God to show up in spectacular, we realize God often does his best work in the day-to-day moments. God surprises us with the unexpected work in the seemingly trivial places. 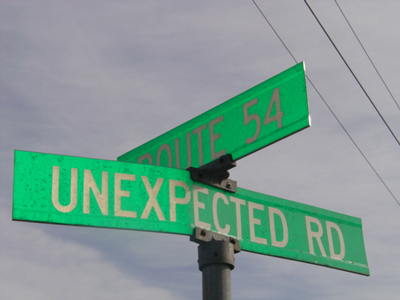 So this week we look at God showing up in the unexpected places.

Jesus shows up in the land of the Gentiles, hangs out in a cemetery (dead bodies are also a no-no for a good Jew) and heals a guy with a legion of demons. Then when the healed man wants to stay with Jesus, Jesus tells him to go away.

Elijah gets an organic fireworks display, but God is not anywhere to be found until a gentle whisper.

The Psalmist finds God in the midst of despair.

Paul says Christ is found outside of the law and all our old ways of dividing the world no longer exist in the kingdom of God.

This week we learn about a God who shows up where God is least expected.

So they arrived in the region of the Gerasenes, across the lake from Galilee. As Jesus was climbing out of the boat, a man who was possessed by demons came out to meet him. For a long time he had been homeless and naked, living in a cemetery outside the town.

As soon as he saw Jesus, he shrieked and fell down in front of him. Then he screamed, “Why are you interfering with me, Jesus, Son of the Most High God? Please, I beg you, don’t torture me!” For Jesus had already commanded the evil spirit to come out of him. This spirit had often taken control of the man. Even when he was placed under guard and put in chains and shackles, he simply broke them and rushed out into the wilderness, completely under the demon’s power.

Jesus demanded, “What is your name?”

“Legion,” he replied, for he was filled with many demons. The demons kept begging Jesus not to send them into the bottomless pit.

There happened to be a large herd of pigs feeding on the hillside nearby, and the demons begged him to let them enter into the pigs.

So Jesus gave them permission. Then the demons came out of the man and entered the pigs, and the entire herd plunged down the steep hillside into the lake and drowned.

When the herdsmen saw it, they fled to the nearby town and the surrounding countryside, spreading the news as they ran. People rushed out to see what had happened. A crowd soon gathered around Jesus, and they saw the man who had been freed from the demons. He was sitting at Jesus’ feet, fully clothed and perfectly sane, and they were all afraid. Then those who had seen what happened told the others how the demon-possessed man had been healed. And all the people in the region of the Gerasenes begged Jesus to go away and leave them alone, for a great wave of fear swept over them.

So Jesus returned to the boat and left, crossing back to the other side of the lake. The man who had been freed from the demons begged to go with him. But Jesus sent him home, saying, “No, go back to your family, and tell them everything God has done for you.” So he went all through the town proclaiming the great things Jesus had done for him.

When Ahab got home, he told Jezebel everything Elijah had done, including the way he had killed all the prophets of Baal. So Jezebel sent this message to Elijah: “May the gods strike me and even kill me if by this time tomorrow I have not killed you just as you killed them.”

Elijah was afraid and fled for his life. He went to Beersheba, a town in Judah, and he left his servant there. Then he went on alone into the wilderness, traveling all day. He sat down under a solitary broom tree and prayed that he might die. “I have had enough, Lord,” he said. “Take my life, for I am no better than my ancestors who have already died.”

Then he lay down and slept under the broom tree. But as he was sleeping, an angel touched him and told him, “Get up and eat!” He looked around and there beside his head was some bread baked on hot stones and a jar of water! So he ate and drank and lay down again.

Then the angel of the Lord came again and touched him and said, “Get up and eat some more, or the journey ahead will be too much for you.”

So he got up and ate and drank, and the food gave him enough strength to travel forty days and forty nights to Mount Sinai, the mountain of God. There he came to a cave, where he spent the night.

But the Lord said to him, “What are you doing here, Elijah?”

Elijah replied, “I have zealously served the Lord God Almighty. But the people of Israel have broken their covenant with you, torn down your altars, and killed every one of your prophets. I am the only one left, and now they are trying to kill me, too.”

And a voice said, “What are you doing here, Elijah?”

He replied again, “I have zealously served the Lord God Almighty. But the people of Israel have broken their covenant with you, torn down your altars, and killed every one of your prophets. I am the only one left, and now they are trying to kill me, too.”

Then the Lord told him, “Go back the same way you came, and travel to the wilderness of Damascus. When you arrive there, anoint Hazael to be king of Aram.

O Lord, do not stay far away!
You are my strength; come quickly to my aid!
Save me from the sword;
spare my precious life from these dogs.
Snatch me from the lion’s jaws
and from the horns of these wild oxen.
I will proclaim your name to my brothers and sisters.
I will praise you among your assembled people.
Praise the Lord, all you who fear him!
Honor him, all you descendants of Jacob!
Show him reverence, all you descendants of Israel!
For he has not ignored or belittled the suffering of the needy.
He has not turned his back on them,
but has listened to their cries for help.
I will praise you in the great assembly.
I will fulfill my vows in the presence of those who worship you.
The poor will eat and be satisfied.
All who seek the Lord will praise him.
Their hearts will rejoice with everlasting joy.
The whole earth will acknowledge the Lord and return to him.
All the families of the nations will bow down before him.
For royal power belongs to the Lord.
He rules all the nations.

Let me put it another way. The law was our guardian until Christ came; it protected us until we could be made right with God through faith. And now that the way of faith has come, we no longer need the law as our guardian.

For you are all children of God through faith in Christ Jesus. And all who have been united with Christ in baptism have put on Christ, like putting on new clothes. There is no longer Jew or Gentile, slave or free, male and female. For you are all one in Christ Jesus. And now that you belong to Christ, you are the true children of Abraham. You are his heirs, and God’s promise to Abraham belongs to you.