Ok, I have an admission. I spend way too much time on Texas Longhorn message boards. I’m a little obsessed. But as a huge fan, I like to keep up to date with everything related to the team.

The past week, something rocked the world of UT fandom: The Longhorns made changes to their football uniforms. I’ll give you a moment to recover from the shock.

In all seriousness, this was a big deal to a lot of people. Some reaction was positive, but many fans were upset. In the world of college football, tradition rules — from the stadiums and mascots to the rituals and cheers. And for the blue bloods of the sport (like Michigan, Alabama or USC), small changes can make huge differences. You’re not just changing a jersey – you’re messing with an icon. 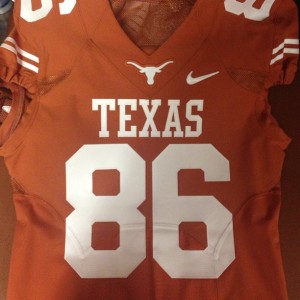 So what were the changes that caused such consternation? Casual observers will have a hard time spotting them in the picture on the right. They amount to an added logo and a shift in the position of numbers. That’s it. When compared to a team like Oregon running around with mirrored helmets, these changes seem minute.

Yet small as they may be, many fans were still crying through their keyboards this week. “Our uniforms are an institution! They don’t need to be changed! Why change for no reason?”

But here’s the funny part: Change has been the norm for these uniforms over the years. The basic of the jersey has stayed constant – burnt orange jersey with white lettering. But the details – like numbers, wordmarks and stripes – have made appearances, moved around or disappeared fairly often since the golden age of the 1960s.

These fans are not holding on to a tradition, but a false reality in their minds. They’re holding on to an idea of who they are and what makes them distinctive.

They’re holding on to nothing.

From the outside, this looks completely silly. Especially if you’re not a sports fan, you probably don’t understand the outrage. But this is not a sports problem. We do this in many areas, even religion.

How much energy do we expend in church arguing about form and function – how we do things? We have an amazing ability to latch on to details instead of the essentials of who we are.

Is the way we do communion the most important thing or simply the fact that we share a communion meal together as the family of God? Is how we sing as important as the fact that we lift our voices together so that our spirits and emotions can be raised as well? I could go on and on – Bible class, evangelism, worship order, where the youth goes to summer camp, etc. I had church members talk about leaving one time when we considered replacing what they sat on during Sunday worship.

We can be really good at missing the point.

It’s easy to hold on to the wrong things as if they are what define us. As if changing small details or adapting with the times will change what makes us distinctive. Because most of the time we’re not holding on to reality, but to a false concept what makes us who we are.

What makes Texas football special is not the location of numbers on a shirt, but people like Darryl Royal and Mack Brown, Ricky Williams and Vince Young. It’s about the essence of who they are on the field, their performance in the arena.

What makes us special as Christians is not form or function, but the way we follow Christ. It’s who we are out in the world – the way we love and are generous and show compassion. These are what define us. Even if every detail of our buildings or programs change, this is who we are.

May we hold on to the person of Jesus Christ, who never changes. He is what defines us.