Don’t forget to check out our reflection for the 8th week of Ordinary Time.

This weekend my family got to take a trip to the Dallas/Ft Worth area for one of my favorite things in the world: attending a Texas Rangers baseball game. We rarely get to do this (especially now that we live farther away in Oklahoma), but were able to have this little getaway due to the amazing generosity of some friends from our former church in Texas. And it was completely awesome for a number of reasons.

First, it’s baseball. And baseball is beautiful. I will accept no arguments on this point.

Second, we got to sit pretty close to the field, even though we were in the outfield. From our seats in the 2nd row, we felt closer to the action and even got to take some pretty cool pics  —

That’s Derek Holland on the left, the night’s starting pitcher warming up his arm…

… and AJ Pierzynski on the right, his catcher playing long toss with another player before the game began.

But the best thing, honestly, is that a big league baseball game brings out the wonder in everyone. If you’ve ever been to one, I’m sure you can relate. Everyone turns into a little bit of a kid, no matter how old you are.

From the crowd jumping to their feet as the bat cracks and the ball rockets impossibly high into the evening sky to the sugary sweet smell of cotton candy and funnel cakes. There’s the strange way a hotdog always tastes better sitting in a ballpark seat. The grandness of the stadium (Rangers Ballpark is affectionately referred to as “the temple.”) The talent of a man to hit a round ball hurled at 95mph with a round bat and send it over 400ft in the air. The “iiiiicccceee cold beee-eeeer” of the stadium vendors. You can see it in the faces of my kids. A big league game is an education in awe and wonder. Even if your team loses.

And it’s not just the kids. At the end of the night, we were treated to a fireworks display set to some of the great Beatles hits. We all sat in the dark and watched the sky light up. And with every blast of light, the crowd “oohed” and “ahhed”. People clapped and took pictures.

Something deep within us searches for the wonder-filled things in this world, the awe-inspiring and amazing.

So much of our life seems so mundane and average. Many of us get up every day and do pretty much the same thing as we did the day before. And yet something within us cries out for the decidedly un-average. Maybe that’s why we can be a society of over-staters (“This is the best brownie I’ve ever had!” “That’s the greatest movie in the history of ever!!”) We long for something to wow us. To be filled with awe.

Because wonder is intrinsically tied to joy. When we experience something that seems so grand or amazing, smiles and laughter inevitably follow. Crazy that feeling so small in comparison also gives us a sense of satisfaction. That understanding our place in the universe — that someone else is bigger and in control — can create comfort and delight.

It’s very difficult to make it through life without wonder.

This is part of the reason I love the work of Rob Bell so much. I know that some disagree with his theology or think he’s some kind of hipster doofus. But he approaches the world as if it is amazing. He looks around at nature and people and sees the magic of it all. And you know what, he seems like a genuinely happy person.

Most of us are not like that. We become jaded and disillusioned with the world around us. We’ve been disappointed by the world’s promises and let down too many times by those close to us. But if we lose the wonder in life, we are in danger of being really unhappy people. And that’s not who we were created to be. 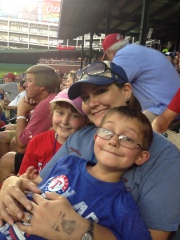 So what inspires wonder for you? It may not be a baseball game. Maybe it’s the mountains or good music or art or watching someone flip a motorcycle off a big mound of dirt at the X Games. I don’t care what it is for you — go connect with that. Discover the focus that results from seeing the marvelous and fascinating world God has created.

Rediscover the joy that is attached to being awed and amazed. And reconnect with the God at the center of it all. I guarantee joy will follow.

One thought on “Rediscovering Our Wonder”