Be sure and check out this week’s readings.

Yesterday, America celebrated Columbus day. I have never understood this holiday, mainly because I am not sure I have ever received a day off because of it. But I have grown more weary of it as I learn more of American history. 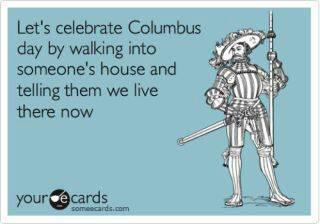 Columbus was specifically sent as a missionary to convert the Indians and ended up exploiting, mistreating, and committing horrific acts of violence against the Indians. (Incidentally, he was arrested for this.) It was an awful example of what happens when Empire and Christianity are confused and people use the name of Jesus as a way of dominating and oppressing others.

But we aren’t given this picture of Columbus very often. Until I read this account, all I really knew was “In 1492 Columbus sailed the ocean blue.”

Yet we celebrate this figure in the life of our country.

And I think it is because we don’t often take the time to examine the legacies, stories, and information we are handed.

This is true in the narratives of our country, but it is often true in our narratives and beliefs as Christians. We get handed certain beliefs, practices, doctrines, and theologies and we often do not take the time to think through them.

In fact, this is often how we approach church. We want to go to church and be handed something which we don’t have to examine, and then just walk away. Even if we are being handed good things, not understanding them can lead us down bad roads.

Columbus could be used as an extreme example. If we never stop to question things like empire and Christianity getting intertwined, we can easily justify some pretty awful things. We would find very quickly that empire and the way of Jesus have very different values and goals.

But unexamined assumptions can find their way into our lives in more subtle ways. Ways that do not end in cutting off noses and ears.

We find ourselves railing against practices, beliefs, ideologies or people groups but we do not really know why. We find ourselves living in destructive ways which we justify through beliefs we just picked up along the way and never stopped to examine. We find ourselves trying to dominate and manipulate others and we do it in the name of Jesus because they are wrong and we are right.

We need to do a better job of thinking about the things we believe and practice. We need to ask better questions about our traditions and ways of living. We need to spend time examining the narratives we allow to shape our lives. When we know why we do something and how we got there, we can better evaluate them and see if they align with the person of Jesus. Even if we never change a belief or practice, it becomes more meaningful and we can live into it more deeply when we really understand it.

But what do we do when we encounter something like Columbus?

This post inspired me. (And I researched it so as not to be a hypocrite)

If you don’t want to look through the whole thing, the post walks through some of the bad stuff about Columbus. It exposes the false narrative. But it doesn’t stay there. It offers an alternative. It celebrates a man who protested against the exploitation of the Indians and worked as an advocate for the Indian people.

It breaks down a false hero, and offers a true one. I think we need more and more of this.

But it is not just a critique. It is building something new.

We need heroes who look at society and say, “This is not okay” and embody an alternative instead of standing in judgment on the sidelines.

It is not simply calling out what it is wrong in the world. It is doing something about it. It is replacing hate with love, oppression with justice, and violence with sacrifice. It is speaking out against places where we have taken people’s voice away and finding avenues for reclaiming their voice.

So as Christians, perhaps we need to celebrate Martin Luther King, Jr a lot more and Columbus a lot less. We need to be conscious of our narratives and embody new and beautiful versions of what God wants to do in the world.