If you have been online at all this week you have seen the news and response to the passing of Robin Williams via suicide. In many ways this has sparked a national debate on the nature of suicide and depression. Per usual, lines are drawn in the sand and angry words are spoken along political, religious, and social lines.

I’m always bummed about stories of suicide. The fallout is incredible for those close, but in cases like Robin Williams, the fallout is global. Not only was a human being lost, but one who brought joy and laughter to millions upon millions – the very things opposed to the way of his death.

As one who has dealt with depression (on my own level….not looking to attach severity), I understand on some level the pain that leads to thoughts of suicide. Though I never got to that place, I have seen the path people walk and know there is so much more to the conversation than a simple choice or pure selfishness.

In so many ways, depression is a profound loneliness. Not only do you feel alone, but you also feel like anyone who would try to intervene could never understand what you are feeling. There is shame, guilt, fear, and an overall sense of despair. A friend recently described it as an empty feeling in the stomach that comes up without notice and stays as long as it wants.

There is an incredible stigma in our country with mental health issues. Why would someone want to kill themselves? We live in the most prosperous country in the world – how could you be unhappy? What are you doing wrong to make you feel that way?

In our country, we have grown so accustomed to easy and quick answers that when something as mysterious and unknown as mental health strikes with such force – we don’t want to really deal with it. In the church it is viewed as a product of sin and needs to be repented of. In the workplace and in schools it is not seen as a certifiable illness and needs to be overcome. In the natural world, there is obviously an imbalance needing adjustment.

One of our readings this week addresses a man on the run. Elijah was running for his life from Jezebel after an incredible showing of God’s power. In a dramatic scene, not only did God come through and show himself to the prophets of Baal and to Ahab and his queen. Elijah’s job as a prophet was to speak the word of God to the people and turn their hearts back. In the showdown on Mount Carmel, God showed up like Elijah had asked and rain soaked the drought stricken land (Read 1 Kings 18 for the whole story).

Yet even though Elijah had done his job, the people had seen God, and the rain was falling – his life was now forfeit. The angry queen swore by her gods that he would not be alive for long because of what he had done. So, he ran into the desert.

He ran, left his servant, then ran some more. He finally came to a solitary tree in the desert and sat down. Then, he told the lord something we would never suspect. 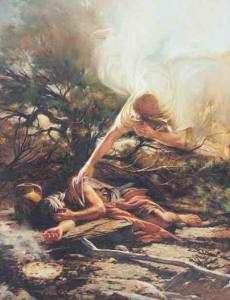 He wanted to die. He was done with this life. Even though God had come up huge for him a day earlier and made all of his words true, he still wanted to die.

Some might say he wanted to die because he was being pursued by the queen for his life. Maybe, but I don’t believe this is the first time Elijah’s life was at risk. After all, it was his prophecy that brought the long famine on the region. Of course, he was a marked man and had been for a long time.

Why would Elijah want to die?

What did God do?

He fed him. Then, told him to go back to sleep. Then, fed him again.

You see, Elijah’s journey was not over yet. But, God wasn’t in the business of shaming his weakest moment. He gave him what he needed until a time where he could walk again.

I can’t imagine the pain and uncertainty going on in the mind of one of the greatest prophets of Israel to where he would want to die. But, I do know that God had patience for him in this place and gave him the simple and necessary things of life to get him better – food and sleep.

What does this tell us?

Unfortunately, Mr. Williams wasn’t able to access this care in the hour of his greatest need – and that makes me really sad. But, what I do know is God loves those in darkness and wants us to do so as well. God loves Robin Williams and all those who have not only been to the point of taking their own life, but I would submit those who died. May we show the same love and mercy to those who are hurting.

What do you think about this? If you have struggled with mental health issues, how does this strike you? How do these thoughts compare with how you have interacted with those with depression and thoughts of suicide?