The three of us had a conversation a couple of weeks ago about how there are times when we are sad to be a part of the Christian blog world. The last few weeks have been filled with all sorts of vitriol over Ebola, Mark Driscoll, Robin Williams, modesty and sexuality, Israel, ISIS, beliefs about the Bible, and Ferguson, MO.

It is exhausting and hard to watch.

I feel like much of this comes from several people who devote themselves to policing blogs and social media to make sure other people are Christian enough for the internet. These people devote their time to finding the people they need to be against – the people they need speak out against and call to task and exclude from who they consider to be orthodox.

Sadly, Christians are often most known for who they are against. Mainly because we are good at it. We are good at railing against the ones who do not meet the criteria for good, holy, Christian, orthodox people. Watching people battle for who Christians should be against is sickening. Because it misses the message of Jesus. 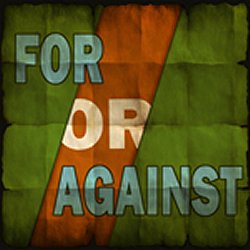 The message of Jesus is that God is FOR human beings. Jesus comes not to tell us who God is against, but who God is for. And we find out that we human beings have often excluded and set ourselves against the very people God includes and loves and welcomes.

All of the readings this week focus on this inclusive “for-ness” of God and what it means to be God’s people. But none stick out to me more than the story of the Caananite woman. I love this story. I actually used it for my interview lesson with my church in Kansas seven years ago. It is an amazing story.

But I get mad at Jesus almost every time I read it.

Jesus comes across as a real jerk. He basically tells the woman – your daughter’s suffering is not my problem because your race makes you a lesser human. It’s hard scene to watch.

But I went back and read the chapter from a John Ortberg book that first turned me on to this story, and noticed something new.

I think we are supposed to get mad at Jesus.

What Jesus does here is contrary to the entire message of what Jesus is preaching in Matthew. It goes against the embracing, inclusive view of God Jesus promotes, and shows us what exclusionary practices really look like.

Jesus is trying to show his disciples the ugliness of their exclusion.

He is showing them what exclusion looks like when it happens to real people. Each time he pushes back against the woman’s request, we need to groan a little. Someone stand up and say something!! We want to be for this woman and the slow process of Jesus’ arguments is excruciating because we see her pain and her agony and suffering and just want someone to step in and help.

I think that is what Jesus is waiting on as well.

In essence he is telling the disciples: You think this woman is not worthy of my love and care and grace. But hear her story. Look into her eyes. See her as a person. See her as a mother in agony for her daughter. Then tell me she doesn’t deserve my love.

Several months back, during a significant lectureship for the Churches of Christ, a friend of Allen’s gave a talk about women in ministry. He got ripped a lot because he did not spend all of his time working through theological issues, but rather told stories of women and girls who had been hurt by not being allowed to take part in church services because of their gender.

While theology has its place, I would argue there are times we need less theology and more stories like these. Before we sit behind our computer screen and rail at the heretics, we need to hear the stories of the people who have been affected. We need to know what the pain of exclusion looks like. We need those stories, and often we need them much more than we need another blog/social media/theological/doctrinal debate. We need to look into the eyes of another person and decide who is really deserving of grace.

Christianity looks a lot different when we start with who God is FOR, rather than who God is AGAINST.

Even when God in the OT or Jesus comes “against” people (usually the exclusionary religious elites by the way), they do so because of who they are for. Because God is FOR people, certain practices and attitudes and systems need to be done away with. But it always starts with who God is FOR.

I hope as Christians we can start spending a lot more time and effort communicating who we are for rather than who we are against. I actually think this is the essence of what it means to be a Christian.

I hope we can avoid the silence of the disciples in this story. God is patiently waiting for someone to step in and show compassion and love and grace to those who need it more. And the longer we sit in silence, the longer the suffering continues.

But we are assured of this. God will step in. It is what God does. God rights wrongs and is close to the brokenhearted. The pause is for us. God is making room for us to step in. The question is: are we willing to drop all this nonsense about who we are against and who should be excluded, and take on the task of embracing those desperate for the grace and love of God?

3 thoughts on “For and Against: Getting Mad at Jesus”