So Jonah got on a boat and headed in the exact opposite direction.

If you’ve gone to Sunday school for any amount of time or read portions of the Old Testament or are familiar with Veggie Tales, you probably know what this story is about, right? It’s the fantastical one where the dude gets swallowed by a huge fish and lives in its stomach for 3 days until he sees the error of his ways.

But that’s not the real story of Jonah. To understand, we have to know about the Assyrians. And the Assyrians were not good people in the eyes of Israel, Jonah’s tribe. No, the Assyrians had been a thorn in Israel’s side for years. They laid siege to cities, taken people from their homes to serve as slaves and used military might to subdue their foes.

(Which kind of looks like what Israel had done in Canaan, right? Destroying cities and taking captives or killing whole settlements of people. I wonder what the Assyrians thought about Israel? But that is a discussion for another time…)

Basically, the Assyrians were the enemy. Them. The others. The evildoers.

So when God comes to Jonah telling him to go preach a message to Nineveh, Jonah wasn’t exactly excited. Nineveh was the capital city of — you guessed it — Assyria. So when Jonah gets on that boat going in the opposite direction, he wasn’t being a petulant child or lazy or obstinate.

And even after the part of the story that we cutesy up and put in children’s story books — the part with the fish and being spit back up onto dry land — the question persists. It persists even after Jonah finally obeys and preaches God’s message to the Assyrians. It remains as we see the Assyrians repent from their mistakes.

(And I mean REPENT. The king ordered everyone and even the livestock to wear sackcloth and ashes. Can you imagine that scene? Those guys know how to say they’re sorry.)

It’s at this point in the story where we expect the redemption to come. God allays his judgement, so Jonah will too. Surely Jonah has seen the error of his ways. If the smell of fish intestines didn’t wake him up, then a whole city in mourning for their sins will do the trick. Uh, not exactly.

But to Jonah this seemed very wrong, and he became angry. He prayed to the Lord, “Isn’t this what I said, Lord, when I was still at home? That is what I tried to forestall by fleeing to Tarshish. I knew that you are a gracious and compassionate God, slow to anger and abounding in love, a God who relents from sending calamity. Now, Lord, take away my life, for it is better for me to die than to live.” Jonah 4:1-3

No, instead of hopping on board the mercy train, Jonah chooses to pout. Basically he tells God, “I KNEW this was coming and I want no part of it.” And that’s how the story ends — with our hero pouting about God showing mercy.

This is quite the strange story. But one that still has a lot to say to us.

There is an ethic in our culture that forgiveness is “live and let live.” In other words, forgiveness is a willingness to lay down our right to retribution. To allow an offense to go without seeking revenge and to let one another live in peace. To leave each other alone.

But what God is showing Jonah is that forgiveness goes much deeper than that. As author Lew Smedes describes, “You will know that forgiveness has begun when you recall those who hurt you and feel the power to wish them well.”

This is the forgiveness that God was asking of Jonah. True forgiveness is so much more than “live and let live.” Instead of separating ourselves from others, forgiveness asks if we are willing to be a conduit of God’s love, mercy and grace to another. Even after they have wronged us.

It is the same forgiveness Jesus implies when he tells us to love our enemies. Not to let them be, but to love them and seek good for even those who persecute us.

It’s easy for me to sit in judgement on Jonah or make his tale into a cute Bible story with a large fish. But the reality is that I probably would have gotten on that boat, too. This forgiveness stuff does not come naturally or easily. I would much rather ignore a problem than face it head on. 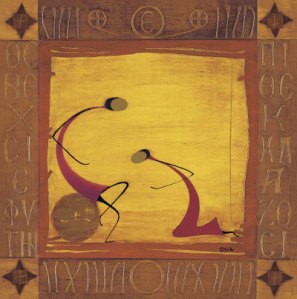 Because when we don’t get on that boat and choose to turn the other cheek or seek good for the offenders in our lives, relationships are healed. Truth is apparent. Love wins. And heaven becomes a real place on earth.

So today, don’t get on that boat. Don’t ignore the offenders. Instead pray for them. Seek to bring beauty and good into their lives. Love your enemies well. It’s hard, but it’s worth it.

3 thoughts on “Jonah, Grudges and Conduits of Love”