But let’s begin with art. I don’t quite feel qualified to discuss art. I can’t draw or paint or sculpt with proficiency. I can sing a little, but have never written a song or a sonnet. And please, please do not ask me to dance. That will be good for no one.

But I love art. Because art makes us look at life from new angles. It engages our hearts and can stir our own imaginations. It inspires us in ways that other forms just can’t. It fills our lives with wonder and beauty. 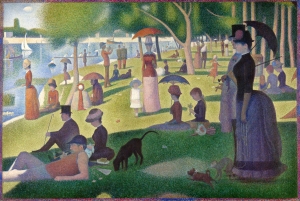 A Sunday Afternoon on the Island of La Grand Jatte

I remember going to the Art Institute of Chicago and seeing the first painting that hit me as something, this thing that I couldn’t describe or explain, but I knew was beautiful and meaningful and significant. That painting was A Sunday Afternoon on the Island of La Grande Jatte, by Georges Seurat, a print of which hangs above my couch.

About a decade later, I sat in a large auditorium watching a couple of my youth group students perform in a dance recital. I never imagined I’d ever be at a dance recital. Not exactly my scene. But as I sat there watching these incredibly gifted young people move around the stage, I couldn’t believe how much it moved me. One of them was expressing her faith out in a way I never could. It reminded me of the way I felt in the Art Institute.

Honestly, I haven’t always appreciated art. For the first half of my 37 years, I virtually ignored its existence. I’m sure this is partially due to the ignorance of youth. I was much more concerned with sports and video games and pretty girls and whatever I thought made me look cool. And certainly my personality played a part — you tend to pursue areas where you’re gifted.

But I was also exposed to very little art growing up, especially in a church environment. My faith tradition (Churches of Christ) has produced very little art. The entire Evangelical Christian movement is somewhat the same way. Why is that?

There was once a time when the Church was at the forefront of art.The magnificent European cathedrals. Handel’s Messiah. Dante’s Divine Comedy. Michelangelo’s David and the Sistine Chapel. We produced paintings and music and sculptures and architecture. These works are not just cornerstones of the Church, put pillars of Western Civilization that have inspired thousands upon thousands.

We once produced masterpieces. Now we produce propaganda films with canned plot lines and poor acting.

So let’s talk about fear for a moment. Earlier this week, Trevor talked about how too many times we are letting fear drive us. Yes, we live in a scary world that is full of danger. Fear is really a natural response to such things as ISIS or ebola. But that doesn’t mean it’s the correct one.

Think about how we respond to fear. Our bodies tense up. We hold on to whatever is in our hands with a tighter grip. We brace for impact. We prepare for a fight or we run away.

And when I look at the Christian culture in this country, this is often the type of reaction I see. There is an entire Evangelical Christian machine that holds tightly to its definitions of what is “Christian” and what is not. In reaction to a world that every day seems less moral, more scary and dangerous, it grips tighter to its definitions of who “we” are. And so walls are built up between ourselves and the “others” in the world. We circle our camp and defend our borders.

Let me give you some examples:

Lecrae has become one of the biggest artists in the Christian music industry. Since he really broke onto the scene with the song Jesus Muzik around 2006, he has continued to gain popularity, selling out arenas and winning Grammys and Dove Awards along the way. But then in 2013 he joined the Rock the Bells tour along with some not-so-Christian acts (like the Wu Tang Clan). Lecrae thought he was taking his message to a captive audience; a lot of Christians thought he was selling out. So at the height of his accomplishment (his newest album Anomaly has reached the top of the Billboard 200 chart and the gospel charts simultaneously, the first artist to ever accomplish that feat), he’s also facing his harshest criticism from Christians, who have called his motives into question.

Or take Sadie Robertson. It’s fair to say that few families have been celebrated as much as the Robertsons, the stars of the hit show Duck Dynasty. The show became the #1 show on TV largely due to its massive Christian following. When the show’s patriarch, Phil, stirred media controversy with comments about homosexuality and Islam, it was Christians who stood staunchly in support of his down-home values.

But then the 17-year-old Sadie showed up on Dancing with the Stars performing moves and wearing clothing that some Christians thought were inappropriate. It didn’t take long for the blog posts to fly and the radio chatter to hit full throttle, questioning how her parents could allow her to be wear those clothes or dance like that.

The Christian publishing industry might be the biggest culprit. Because when Rob Bell writes a book that is full of questions and hope about the afterlife, but those questions challenge the prevailing assumptions…or when Rachel Held Evans writes about biblical womanhood and, because she’s talking about females, happens to use the word “vagina” in her text…Christian bookstores refuse to sell them or rip them off their shelves.

We carry around these definitions about what it means to be “Christian”. And in response to a scary world, in fear we hold on to them so tightly. We brace for impact and battle. So much so that when a Christian steps outside of these pre-defined parameters, questions about their character begin to fly and accusations are hurled. The reactions are harsh and swift. We circle our camp and defend our borders.

Which I can understand. We have to hold true to Jesus and who we are as his followers.

But our fearful responses have a side effect: It’s produces really bad art.

At its best, art is dangerous and edgy. It asks us hard questions. It forces us to think. Good art challenges our preconceived notions. It asks “why”. It pushes boundaries and makes us uncomfortable. Art comes from honest and raw places that are often outside of the norm.

Good art is not born of fear.

And this is where the good news comes in. As Christians, neither are we. We find our true home not in fear, but in love. A love that drives out fear.

So even in a scary world, we can feel secure. The Truth fears no poking or prodding or accusations. True love allows walls to be tested and borders to be expanded. Love inspires.

Maybe if we can let go of our fear and allow ourselves to be better motivated by love, we can begin to produce more art. Better art.

And maybe instead of fighting the “others” around us we can inspire them.

9 thoughts on “Fear and the Slow Death of Christian Art”