So exactly how sick are you of reading about the recent SCOTUS decision on marriage? It’s been less than a week, but it only took a few hours for me to hit critical mass. So much reaction and overreaction and downright freaking out going on. It’s not something I really want to add to here.

So I’m not going to comment on it directly. Because I doubt you really need to know what I think. Some of you would agree, many of you wouldn’t. And that’s ok. But after these last few days, I’m more convinced than ever that online mediums and social media are poor avenues for fostering any kind of nuanced discussion and communication.

There is, however, a specific aspect in the aftermath of the decision that affects our discussion this week of church as institution. In recent days several articles have been written about the possibility of churches and religious non-profits losing their tax exempt status. If you’re not aware of the argument for this to occur, it goes something like this:

The United States government has ruled that marriage is a fundamental right for all people. Institutions that benefit from governmental privileges like exemption from taxes do so because they abide by the government’s guidelines. So if a religious institution decides it does not want to play by the government’s rules, although they can still receive legal protection for their beliefs, they are not rightful heirs to all the advantages government provides. In short, if you’re not going to uphold gay marriage, you should pay taxes. 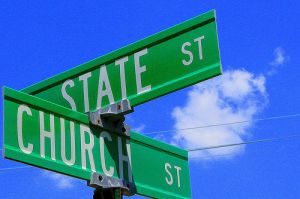 I don’t bring this up to inspire fear or argue for one side or another. Your opinion on this is most likely set in stone on the issue. The reason this is interesting — whether anything comes of it or not — is because the alliance between churches and the government is a strange one anyway.

When I’ve officiated weddings over the years, I have done so in the capacity as a Christian minister. I’ve been asked to do so because that is my role in those people’s lives. But there’s always the funny part at the end when you’re supposed to say something like, “By the power vested in me by God and the state of _______ , I now announce you man and wife.” Which is always really awkward. It’s a strange act to be both a representative of God and an agent of the state, even if the interests of both are aligned at that moment. In fact, several couples have asked me to avoid that clumsy part altogether.

But this is a side effect of the way we do church in America (and what the church has become over the centuries). We are a corporate entity, whether our particular church is large or small. We aren’t simply a gathering of Christ-followers like we see in the book of Acts. When we gather and sit in our pews on Sundays, when we “place our membership” with a church, when we place money in the offering plate or push that button to donate online, when we claim our contributions as tax-exempt — we are participating in a different animal. An institution and not simply a collection of individuals.

This is the dominant way we have come to understand “church” because it is the only way the majority of us have experienced it.

So news like this comes with a large side order of fear. The way we’ve experienced church and our corporate affiliation with government has brought benefits. As someone who earns his livelihood from the institution of church, I understand this well. I’ve earned paychecks and reaped tax advantages. The possibility of losing these benefits brings anxiety. Imagine if your donations were no longer tax deductible or there was less money in your church’s budget for programs and staff because due to tax bills. These are not welcome changes.

Institutions tend to act in self-preservation to preserve their standing. So the anxiety is understandable. The church in America has benefited greatly from the privileges provided by the government. We do not want these to change.

But amidst all the future possibilities and speculation, let me encourage you with this: The kingdom of God is much bigger than any institution. The church is so much more than the corporate entity that owns the building and has a payroll.

You could strip all these things away and the church would still stand. Because the church at its heart is a gathering of people. And maybe we forgotten somewhat in the middle of all our buildings and conferences and structure. Maybe the church could even benefit from a little de-institutionalization.

Ultimately, we are not people of fear. We are people of love and hope and peace. So no matter what implications are headed our way in America, I believe God will continue to work through his people.

Church may begin to look a little differently in the coming decades. That may not be such a bad thing. The institution of church in America may even fade. But the Church will be just fine.

Because we are not simply members of an institution, we are participants in a kingdom.

One thought on “Kingdom and Institution”