In Acts 10, Peter goes up to the roof to pray. It’s midday, he’s hungry and he falls into a trance.

Because Peter is a Jew. No, scratch that. Peter is a GREAT Jew. He comes from an area that’s known for religious zeal and meticulous keeping of Torah. So when Peter sees this large sheet, held by its corners and full of animals of all different kinds, being lowered from the sky, he knows what is important. Some of those animals are “clean” and some are not. And they’re all touching one another in the gathered sheet. Which means that none of them are “clean” anymore.

So when God tells him to eat the animals, Peter knows that everything in the Torah told him that was not okay. No way was he even touching those things. So that’s what he tells God.

That’s right — God tells Peter to do something and Peter tells God no. He doesn’t comply; he argues. (Which is a long, rich tradition among God’s people, so if you’ve ever found yourself arguing with God, you’re in very good company.)

But God is persistent. He gives Peter the vision 3 times, which simply mystifies Peter. Until he hears about a man named Cornelius. This guy who loves God, but is a Gentile. And finally Peter understands that Cornelius is like those animals. And that no one is “unclean” anymore. The world has changed.

Can you relate to this at all? Peter had this construct with which he viewed the world. This framework informed everything for him — the world, who God was and what it meant to follow him. It worked. And suddenly with one experience, *poof*, a whole new world opens up for him. Not a slightly different one, either, but one in which those old constructs and rules and guidelines no longer applied.

In fact, they were holding him back rather than pushing him forward.

Have you ever had an experience like this? Maybe you read something or experienced something or had this amazing conversation or met someone new and the world seems different somehow. As if the sky was now purple instead of blue and you’re struggling to keep up.

And sometimes the things you’ve been taught or the way you were told to look at the world or the framework you were given doesn’t seem to work anymore. In fact, it feels like its holding you back.

This is a story I can relate to.

Every now and then one of my kids will come out of their room after getting dressed in the morning and I’ll think they must have put on an old pair of pants. Because the jeans they have on look like they’ve shrunk or something and the hems are ankle high. Until I realize those are the pants we bought a month ago and they’re already outgrowing them. The pants simply don’t fit anymore.

Growth often comes in spurts. As much as I’d like it to be this steady upward arrow leading us forward, it is more like a jagged ascent full of sudden lurches upward interspersed with long quiet plateaus. The things that really help us grow come in unforeseen bursts and the world can change quickly.

Many times I’m struggling to keep up. But this is the way growth works.

The simple truth is this: Often our religious convictions can be the very thing that anchors us to a reality rather than the thing that pushes us forward.

We can read and ponder these thousands-year-old words and come away with rules and guidelines and decrees. We can read stories about faithful people in their time and try to restore some reality rather than living in our own. We can find some convictions and hold on to them tightly.

And these things can be all well and good and work in so many ways. Until one of these experiences, these disruptions come along and changes everything. 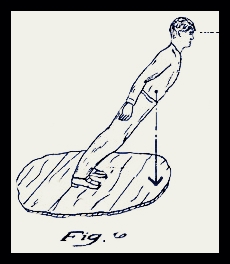 Let me encourage you with this: The Bible is not an old collection of writings telling some stagnant story that is rooted in an old reality. It is rather the story of God constantly pulling people forward into a new way of living, urging them forward to take the next step. And this God is patient and loving and gentle and (yes, sometimes) shocking and disorienting.

But God is always challenging us to step onward. Leading us to what is ahead rather than behind.

And we can either bend backward or lean forward.

So when these disruptions, these experiences or revelations come your way, don’t dig in your heels.

Step onward in confidence that God has always been ahead of us, creating new realities rather than getting stuck in old ones. Don’t let old ways of thinking act like an anchor to your soul. Think, dream, create, use your imagination. Bring something new into the world.

Because this is the nature of God’s story. And it’s the way God continues to move.

One thought on “Leaning Forward”